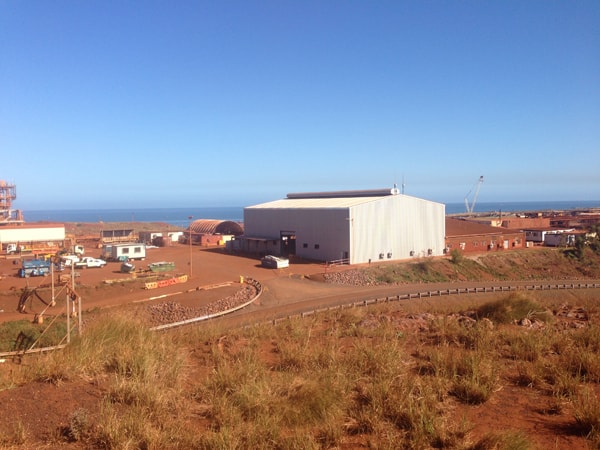 One of PRC Building Services most recent projects involved some of the toughest working conditions in Australia. Around the end of 2013 the company was asked by Rio Tinto to provide commercial roofing and building services for their site at Cape Lambert in the Pilbara region in Western Australia (WA). Cape Lambert is Rio Tinto’s Iron Ore port facility, and is approximately 40 kilometres north of the town of Karratha and over 1500 kilometres from Perth. The facility is one of the three integrated shipping terminals the company runs in the northwest of the state.

The project was part of Rio Tinto’s ongoing major expansion of its iron ore operations, which involves significant investment into its port, rail and power infrastructure in the area. The brief for PRC Building Services was essentially for two projects: a complete re-cladding of a shed and an upgrade of a workshop. Apart from the major structural upgrades, it was anticipated that these jobs would involve a range of building and construction services, including the installation of a new ventilation system, a ceiling replacement and an upgrade of the existing air-conditioning system. As part of the $3 million project, other works included:

The Cape Lambert project involved several challenges. For example, the busy site was to be occupied during the roofing and building works, and the client required as minimal disruption as possible. It was critical that the planning and scheduling of works was efficient and effective, minimising any impact to the employees, contractors and visitors to the site.
PRC Building Services is renown for its record of providing projects with zero down time for clients as well as zero safety incidents, and they were proud to maintain this record over the 14-week period of this project.

Difficult on-site conditions also posed a challenge during the job. Western Australia is known in general as having some of the harshest and most challenging weather in Australia – from extreme temperatures to severe winds and even tropical cyclones. The Pilbara region in particular is subject to spectacular storms and hot and windy conditions. As the project was scheduled for November through to February 2014, the commercial re-cladding and building jobs were carried out during the hottest and windiest part of the year. Again, despite the difficult working conditions, the project was completed on time and with no safety incidents.

By being able to provide a variety of commercial roofing and building and construction skills, PRC Building Services saves clients time and money. They have over 20 years’ experience completing projects for businesses of all sizes and industries – from small, one-off roofing jobs to large complex projects for multi-national corporations. Their high level of professionalism and impeccable safety record make them the number one choice for commercial roofing and building services in the state.